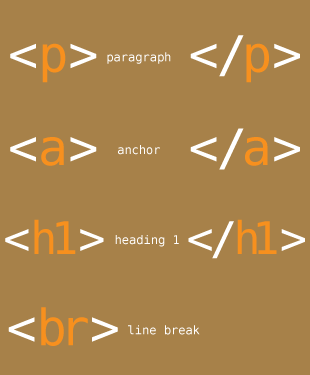 HTML, or Hypertext Markup Language, is the language used to describe the structure of content on the web. As with other markup languages, it uses tags to identify page elements and describe the page’s semantic structure. An easy way to visualize this is to consider the various types of documents you see on a day-to-day basis, like magazine and newspaper articles or documents created in a program like Microsoft Word. The formatting of those documents ensures that the information is presented clearly, with a distinct hierarchy. This allows readers to quickly scan the page and determine which information is important and how the content relates to each other. HTML allows us to do that for web pages by first establishing the overall document structure, and then formatting elements like headings and paragraphs.

HTML can trace its roots back to 1989 at CERN, the European Laboratory for Particle Physics. There, Tim Berners-Lee came up with the idea of having scientists from around the world collaborate on research. His idea was rather than simply making documents available on a server as many people were doing at the time, the documents themselves should be able to link to one another, in a way that would enhance collaboration and make information easier to find and more accessible. From this idea Tim created HTML (based off SGML, an earlier markup language) to format pages and HTTP (or Hypertext Transfer Protocol) to transfer them from one computer to another. Although the world didn’t quite realize it yet, the World Wide Web was born.

As the popularity of the web increased in the early 90s, HTML underwent a series of rapid changes. Browser manufacturers like Netscape and Microsoft started to develop their own proprietary tags, and development bodies like the IETF (the Internet Engineering Task Force) and the W3C (the World Wide Web Consortium) were finding it difficult to gain traction with the standardization process of HTML. By 1995, the W3C created an editorial review board for HTML that included members of the W3C as well as representatives from browser developers and other organizations. This collaborative board had a major impact in stabilizing the HTML standard and reducing the uneven implementations that had plagued earlier browsers.

This resulted in the HTML 4.0 specification being released in 1998. It was the most stable version of HTML up to that point, and formalized many of the improvements made to HTML over the years. It’s still the most widely used version of HTML and remains the baseline for authors and implementers alike.

Around the time that HTML 4.0 was published, a movement began to evolve HTML towards a more flexible style of markup language. Although authors had tried to anticipate the tags necessary to markup documents, the spread of the World Wide Web and the diversity of user agents made keeping up with requirements difficult. In the eyes of many, migrating to a markup language like XML, which allows authors to create their own tags to represent content, would alleviate those concerns and allow HTML to evolve organically. XML also contains stricter formatting rules than HTML, and a sizable number of authors and developers found HTML’s lax parsing rules problematic. This effort resulted in the publishing of the XHTML 1.0 specification in 2000. Although it was not a dramatic departure from HTML 4.0, it did introduce new syntax rules to conform to XML requirements and eliminated the HTML elements that were seen to be dictating the presentation of content rather than the structure of it.

Shortly after the 1.0 specification was published, work began on XHTML 2.0, which was to move HTML further towards XML. XHTML 2.0 was a dramatic departure from previous versions of HTML and was never able to gain any traction among browser developers. The specification languished for years in the W3C before its charter was revoked in 2009, essentially ending development.

While the W3C was taking HTML down the XHTML path, a group of authors, developers, and organizations became frustrated with the lack of progress on updating HTML. This group decided to evolve HTML independently of the W3C and formed the Web Hypertext Application Technology Working Group (or WHATWG) in 2004. They began work on the Web Applications 1.0 standard, which extended HTML 4.0, adding clear parsing rules for user agents and creating APIs to make developing web applications easier. The W3C, realizing that XHTML 2.0 faced significant hurdles in adoption, began working with the WHATWG and began to jointly develop the new standard with them in 2008. Currently the W3C works on publishing a stable version of the specification, while the WHATWG continues to work on what they call a “living standard” of the specification. As a living standard, they’ve removed the version number and simply refer to it as “HTML.”